Punk has its early queer origins since the Sex Pistols dressed in bondage gear, and the Buzzcock’s iconic “pansexual anthem” “Orgasm Addict.” The term “punk” itself has a long queer history as it celebrates the society that rejects it. Queer punk is loud, celebratory, political and funny. In celebration of Pride Month, I compiled a list of trans women who paved the way or are currently making music history in the punk industry.

Expression of individualism and nonconformity. Since its foundations in the early 1970s, the punk community is exceptionally known for providing a safe space for youth to house their frustrations about economic, racial and gender inequality and the rejection of mainstream lifestyles and ideologies. Despite the radically inclusive attitudes shared by the community, visibility for the queer community —especially the trans community— is a glaring rarity. These spaces still struggle with homophobia, especially when there’s clear-cut examples of heterosexual punks using queer sex and slang as messy punchlines. As a result of today’s political climate, there’s an increasing demand for visibility for marginalized communities within the subculture.

Laura Jane Grace is the longstanding frontwoman of Against Me! Grace came out as trans in 2012 and Against Me! released “Transgender Dysphoria Blues” which tackles gender dysphoria soon after. “There’s a brave new world that’s raging inside me,” Grace sings. Since 2012, Grace has been a notable activist through her artistic endeavors and volunteer work. She makes it a statement to disrupt traditional gender and sexuality stereotypes, while bringing queer issues to the hardcore scene.

Adria Stembridge is the vocalist and multi-instrumentalist of deathrock and post-punk band, Tears for the Dying. She has played in a number of bands across Athens, GA; Vomit Thrower, The Endless, The Girl Pool and Strange Dreams. Her latest song entitled “Go Die” was inspired by the channeled rage over how dysphoric she felt as a result of someone’s unsolicited feedback on her appearance. “‘Go Die’” was a belated fuck you to the individuals who went out of their way to make this girl feel dysphoria, uncomfortable and unwelcome,” Stembridge said. By the early 90s, Stembridge said she found herself angry and didn’t have an outlet until she discovered the Athens punk scene. Playing punk allowed Stembridge to get in touch with some of the questions she had about herself and her gender identity, so she started wearing black makeup and skirts. “Punk was very angry and loud and brash, and I needed that,” Stembridge said. “It really helped me to know that it’s okay to be angry.”

Ginger Coyote is notably known for her involvement with San Francisco band White Trash Debutantes in the late 80s. The band openly deals with issues of gender inequality and institutions policing women and trans identifying individuals. Coyote is now regarded as the princess of the underground punk scene. She has performed with everyone from Joey Ramone, Debbie Harry and Lemmy in just one show.

Jayne County of Wayne County and the Electric Chairs is considered a Warhol superstar and a regular around Max’s Kansas City. After moving from the South to New York City, she became a muse at punk clubs like Max’s, a part of Warhol’s Factory and began her transition to female. She was involved in experimental theater, and quickly rose as the most visible and iconic trans performer in New York punk. With her foul mouth and theatrical sense of humor, County set a pre-punk standard for outrageous and shockingly absurd rock n’ roll stage antics that made “Alice Cooper look like a nun.” Her band inspired artists such as David Bowie, The Ramones and Patti Smith. “I have a rock & roll energy. That’s what keeps me going,” said Coyote. 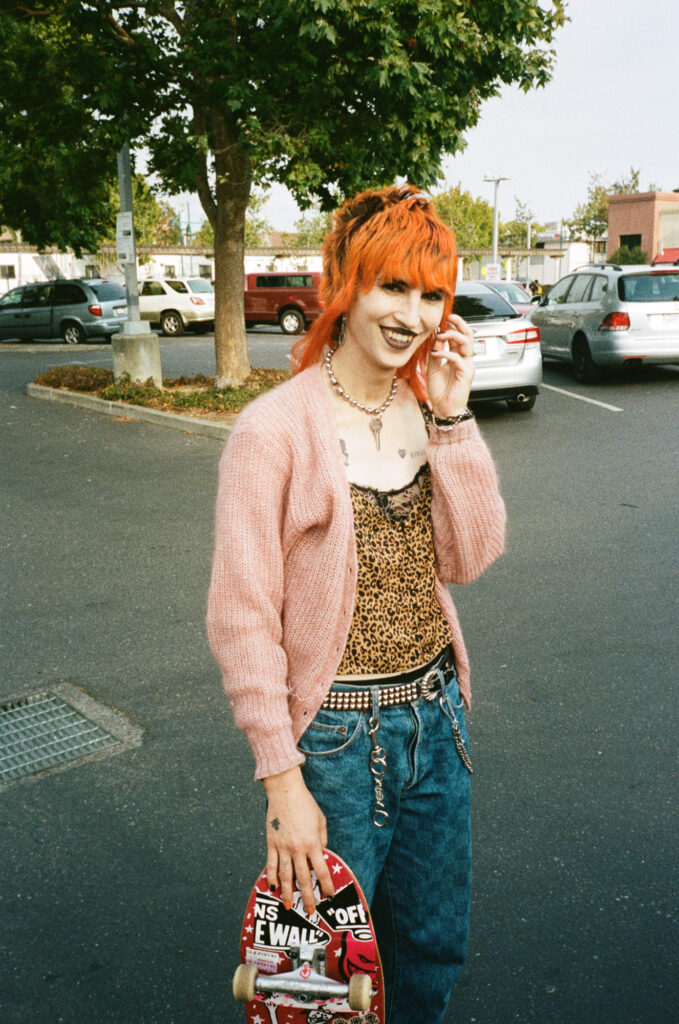 Cher Strauberry; the punk rock, pro-skater and trans icon of Twompsax is an unstoppable force in the skating and zine world.  Strauberry adopted her first name from Cher Horowitz, the main character in her favorite movie Clueless. On March 5, 2018, Strauberry announced on Instagram that she was transitioning. She quickly became an internet sensation with coverage by Thrasher, Vice and The New York Times. She recently filmed a skateboarding video for the SWMRS’ video “Trashbag Baby,” and dropped the first-ever trans skateboarding part with Peach Sørensen called “Strauberry Peach.” At age 16, Strauberry discovered The Alternative Music Foundation, an all-inclusive and all-ages collective music venue. “I saw this band there called the Younger Lovers,” she said. “They were punk and gay, which I thought was sick as fuck, because I had just figured out that I like boys and girls. I was so fucking hyped, I went straight home that night and started my band, Pookie and the Poodlez.”

Emma Grrrl fronts the pop-punk band She / Her / Hers. The band touches on themes of oppressive gender roles, gender identity and full bodily liberation. Grrrl also performs in Grey Matter and RENT STRIKE, both reside on the cutting edge of guttural screams, and leftist politics inspired by anarchist literature, such as the works of Emma Goldman. The ‘Grrrl Angst” EP features beautiful, retrospective expressions of Grrrl’s trans identity in songs like “Gender is Boring” that features lyrics, “Cause if I use she pronouns, well, what does that mean? / Am I reinforcing a gender binary that I don’t believe in, that I don’t adhere to / I say I’m a woman, what’s that supposed to tell you?” Grrrl said that most of her lyrics in “Grrrl Angst” were inspired by processing the mixed feelings she experienced during questioning her sexual and gender identities, as well as the trans narrative of passing within a heteronormative society.

Brooklyn-based band, Aye Nako, have an extremely diverse lineup and radical political perspectives. The only trans woman drummer, Sheena Mcgrath, is hardcore, vibrant and drives the band’s pop-punk energy. The band prides itself on writing “sad punk songs about being queer, trans and black.” The pop-punk stylings interlaced with Brooklyn’s DIY scene, gave the band a sound that is inspired by the likes of Sleater-Kinney. Aye Nako garnered a reputation for labeling themselves “homo-pop” and “queercore” with their inclusive audiences and LGBTQ-friendly outlook. After their 2013 debut album “Unleash Yourself” was released, the members said, “One of the reasons we play music is to play the songs we wanted to hear as queer teenagers.”